I'm not even sure when or where I met John Deann.  I could guess it was a wrestling event or a comic con several years ago.  He's a good dude.
At Wizard World Chicago 2017, he met WWE superstar Alexa Bliss.  In her four year career, Bliss has already won a WWE Women's title four times.  Even though titles do not mean as much as they once did, she is still off to an impressive start.  The question is how long will she wrestle?
Wrestles, especially women wrestlers in the WWE don't seem to stay around for long careers (or at least as full-timers).  There are just so many other opportunities out there, once they make a name for themselves.
Right now, B;iss is one of the most successful and most popular women wrestlers in the world.  Will I still think that in even 3 years?  That's not meant as a criticism.  It's just how it is.
While I have met a lot of wrestlers, I have not met Bliss yet.  Scheduling constraints prevented me from meeting her at Wizard World.  Fortunately, John did not have that problem and he met Bliss.
From John's report and from many others, Bliss was extremely nice.  Within the confines of professional photo ops, there is only so much the celeb can do.  From every report I saw, Bliss was just awesome.  That's always good to hear.  Obviously, these events are money-makers, but it's nice to see they aren't just money-grabs for the celebrities.
I usually like to wait a few years to see if the wrestler stays around.  I might have to make an exception to that policy the next time Bliss comes to a Wizard World. 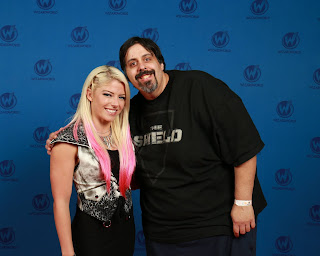