Joey Fatone rose to fame as a member of NSYNC.  I have to admit I am not very familiar with the music of that boy band.  They were pretty good from the little I have heard, but I was a bit too old to really get into them at the time.  I do recognize their success though.
None of that prevented me from wanting to meet him at REWind Con last year.  He was appearing with his NSYNC mates in the nostalgia-filled convention.
Fatone seemed to be having as much fun as his fans were.  I might have had to push my way through a few excited females to have my moment with Fatone, but I did what a good reporter needs to do.
Of course, I had to ask him about his announcing duties on The Family Feud.  Does that show my age?  I just figured everyone was asking him about his boy band days and I would change it a bit.  Fatone said it is a great gig.  Actually, I think Fatone appreciated the change in subject matter.
We also talked about his appearances on Dancing With the Stars and Total NonStop Action Wrestling.  He talked fondly of both.  I got the feeling he would have liked to get a little more involved in the wrestling show, but isn't that every boy's dream?
Fatone was a great guest and I hope he does more celebrity conventions.  With no disrespect to them, Fatone doesn't need to be with his NSYNC crew to draw a crowd.  It was cool to see them together again, but he has done enough outside of NSYNC, too. 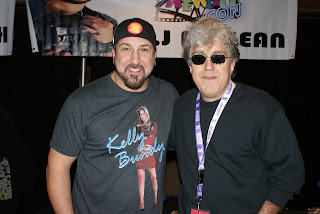 Joey Fatone and me in Bloomingdale, IL-November 2016.
Posted by Johngy at 6:00 AM