Cards That Never Were is a recurring series in which I create virtual trading cards for players missed in various sets.  It is a concept I have borrowed from far too many others to list, but I appreciate all of them.
Johnny Musso starred at the University of Alabama before being selected by the Chicago Bears in the 1972 NFL Draft.  "The Italian Stallion" opted to play in Canada though.  After 3 seasons up north, Musso signed with the Bears and played from 1975 through 1977 with them.  He rushed for 365 yards in his NFL career.  Not surprisingly, Musso never got a Topps card.
Pictures of Musso with the Bears are hard to find.  I did the best I could and managed to make 1977 and '78 Topps cards for Musso. 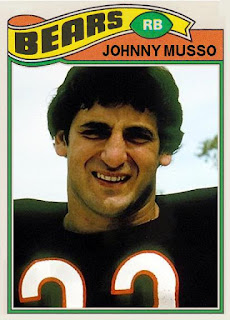 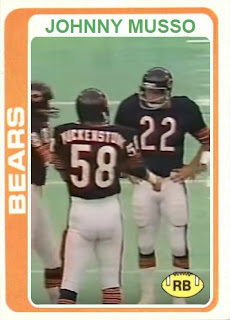