Celebrity Jersey Cards is a regular series in which I create virtual trading cards for celebs wearing sports jerseys.  Today, we feature two of the teams ousted from last weekend's playoff games.

Actress and model Brooklyn Decker was born in Ohio.  Her husband, golfer Andy Roddick, was born in Texas.  Somehow, Decker became a big fan of the North Carolina Tar Heels basketball team and the Carolina Panthers.  She attends games, has several jerseys and even wears the eye black, as seen on her Celebrity Jersey Card.  I love legit celebrity fans and Decker is definitely one! 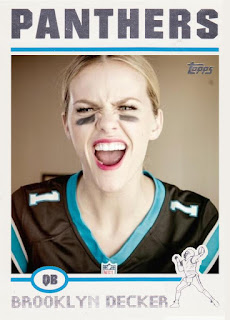 Jenna Redel was a cheerleader for the Kansas City Chiefs.  That's where she met her future husband Mike Catapano.  The problem was that Catapano was a player and such a relationship was against team rules.  Redel left the sidelines.  Catapano would play two seasons with the Chiefs and two more with the New York Jets.  He signed with the Houston Texans for last season, but did not make the roster.  I don't know why the cheerleaders wore jerseys or why they wore certain numbers.  It should be noted that Redel's #55 is was not Mike Catapano's number.  He was #77.  Redel's Celebrity Jersey Card does make me wonder why cheerleader cards were never mass-produced nationally. 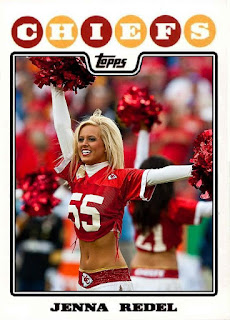