Gabe Baron described actress Dee Wallace as "a childhood crush and a perfect movie mom."  Thanks to Days of the Dead, Gabe got to meet Wallace a few years ago.
Wallace has a lengthy resume, including being the (the perfect movie) mom in E.T. the Extra-Terrestrial.  She had already done a lot of episodic television and tv movies by then, but E.T. was one of her first really big roles.  She continues to be very active and very popular.  On a trivial note, Wallace had a short stint on tv's General Hospital as Patricia Spencer, the oldest sister of longtime characters Luke and Bobbie.
Gabe and I have similar tastes in television and actresses, too.  Wallace didn't have a longtime regular role on any tv show years back, but she appeared on a lot of them, including Lucas Tanner, Starsky and Hutch, Police Woman and many others.
I also met Wallace at DotD and she was gracious and fan-friendly.  She wanted to give me a scoop on her part on GH, but she couldn't.  While I understand that, it would have been cool to get a real; scoop.
The next DotD is in Atlanta on February 2-4.  Gabe and I won't be there, but it will still be a great time for all.  You can get more info on DotD at DaysoftheDead.com. 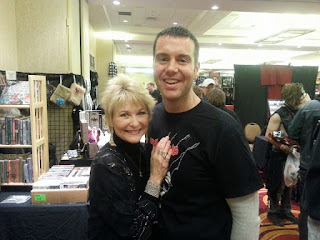 Dee Wallace and Gabe Baron in Schaumburg, IL-November 2014.
Posted by Johngy at 6:00 AM