Celebrity Jersey Cards is a weekly series in which I create virtual trading cards for celebrities wearing sports jerseys.  Today, we have a special Mascot Week edition.

The Chicken originated on an animated TV commercial for KGB-FM Radio in San Diego, CA.  When they wanted a live version, Ted Giannoulas was hired to wear the first chicken suit.  He originally appeared at the San Diego Padres games, but quickly became famous, even appearing on actual baseball cards in the Donruss sets of 1982-'84.  His Celebrity Jersey Card features a rare shot of him wearing an actual jersey, although still representing San Diego. 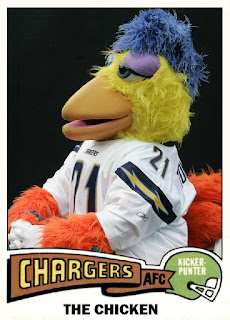 Hubert the Lion (or the Harris Bank Lion) was created for an ad campaign.  Like the Chicken, Hubert became fanous beyond the ad.  Hubert never appeared on a real trading card, but he did have stuffed toys made in his likeness.  Hubert's Celebrity Jersey Card stems from an appearance at a Rockford IceHogs game. 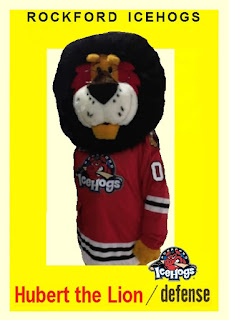