Born in Ottawa, IL, Maria Kanellis attended Northern Illinois University and participated in beauty contests before entering the WWE via a Diva Search.  After several years in the WWE, followed by several in other promotions, Kanellis, accompanied by husband Mike, rejoined the WWE last year.  She is currently on maternity leave.  Kanellis is sporting an Illini jersey on her Celebrity Jersey card. 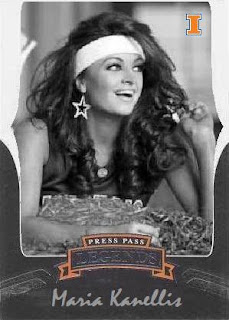 A native of Florida, Michelle McCool entered the WWE via a Diva Search.  She won the Divas title and the WWE Women's title twice each.  McCool retired in 2011 after losing a "Loser Leaves WWE" match to former tag partner Layla El.  She has made a few random appearances since then.  Married to The Undertaker since 2010, McCool is wearing a Florida State University jersey on her Celebrity Jersey Card. 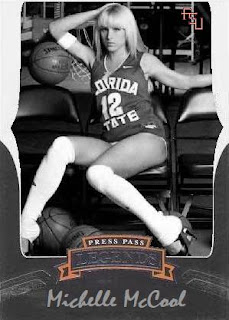