Before there was a Kate Hudson, there was the Hudson Brothers.  Mark, Brett and Bill (father of Kate) formed the Hudson Brothers, a musical band which peaked in popularity in the mid 1970's.  They also ventured on to television with a couple shows, including The Hudson Brothers Hour, a night time variety show and The Hudson Brothers Razzle Dazzle Show, a Saturday morning show.  I loved that zany Saturday show.
The brothers have all stayed in show business in some form.  Mark is a musician, song writer, producer and more.  He co-wrote Aerosmith's Livin' on the Edge, among other hits from Aerosmith and others.
Hudson also worked with Ringo Starr on 9 albums.  That collaboration cemented Hudson's place in the history of the Beatles.  That connection brought him to a Beatles convention and my friend Steve (aka Willy, but that's another story).
Steve is more well-known in the world of sports.  As the Personal Assistant to Hall of Fame pitcher Fergie Jenkins, Steve can be found at many conventions, too.  Presumably, he was off-duty at the Beatles convention (if Steve is ever really off-duty).
This is the kind of celebrity encounter that I love.  Hudson has such a great story, but he rarely does conventions.  The connection to the Beatles is pretty cool, too.  I love how all of these worlds collide into one cool picture (well, as cool as a picture with Steve can be).
I first met Steve years ago and reconnected last summer at a chance meeting when Marv Levy was doing a book-signing.
Steve has a lot of other interesting celebrity encounters, although I am not sure any of them will top Hudson for me.  Hudson is a guy who wouldn't have crossed my mind, but I would love to meet. 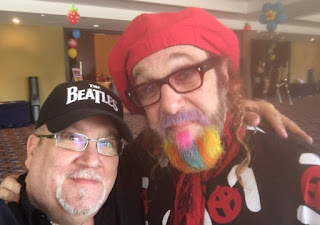 Steve Gassman and Mark Hudson in Rosemont, IL-August 2017.
Posted by Johngy at 6:00 AM

I don't know about Steve but Mark Hudson looks like he has enough cool for ten people. :)