Cards That Never Were is a recurring series in which I create virtual cards for players missed in various sets over the years.  It is a concept I have borrowed from too many others to credit, but I appreciate all of them.
Fred Stanley had a nice 14 year MLB career.  He made his debut in 1969 with the Seattle Pilots and moved with them to Milwaukee for 1970.  The Cleveland Indians purchased him prior to the 1971 season and he played with them until he was traded to the San Diego Padres midway through the 1972 season.  After that season, he was traded to the New York Yankees, where he stayed through the 1980 season.  He was then traded to the Oakland A's, where he spent the last two seasons of his career.
Stanley first appeared on a 1972 Topps card.  Therefore, 1970 and '71 cards were already missing.  He was also skipped in 1973, creating another void.  He did appear on Topps cards from 1974 through 1983, the last being a "career capper."
Finding pictures from the early days is tough.  I had to clean up the photo of him with the Brewers.  That one is not my best effort, but it was all I could do.  Now I present Stanley on Topps cards from 1970, '71 and '73. 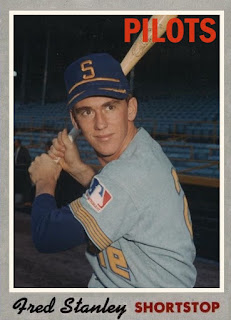 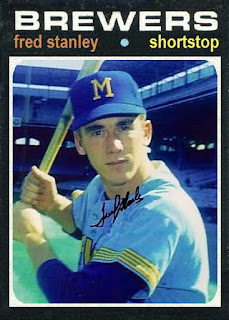 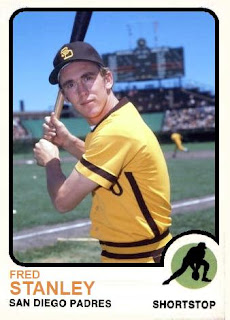