Cat Osterman, Jennie Finch and Monica Abbott. In the world of women's softball, it doesn't get any better than those three women pitchers. They would be my Mt. Rushmore of softball pitchers and I don't even need a fourth to complete the monument.
Combined, they went 298-74 in college and 304-74 in the NPF (National Pro Fastpitch), with 2 gold medals and 3 silver medals in Olympic play. All were/are dominant, feared pitchers and all will be Hall of Famers.
I had the pleasure of covering Monica for 4 seasons in the NPF and Cat for 2 seasons. Jennie retired before I started covering the NPF, but I have gotten to know her a bit from her return visits and clinics with the Chicago Bandits. I have also had the honor of interviewing all three.
Over the last couple seasons, I have started building a small, but meaningful NPF memorabilia collection. Cat recently sent a signed ball. I now have signed balls from the
Big 3."
Any softball collector would want these three, but these balls mean more to me than the stats would dictate. Cat, Jennie and Monica are all class acts. I have been around them enough in public and behind-the-scenes and I have seen three athletes who were fierce competitors, but also great ambassadors for the game.
Several years ago, as a visiting player, Cat gave her time to me, a reporter from an unknown website. Jennie has done the same while juggling clinics and a long line of fans at the Bandits ballpark. Monica took time away from her birthday celebration to give me an interview. Monica also joined the autograph line after she returned to Chicago and no-hit the Bandits.
These three softballs sit proudly on my shelf. They represent three of the all-time greatest. They also represent (perhaps more importantly) great memories I have from my years covering the NPF.
Thank you Cat, Jennie and Monica! #CatchOn 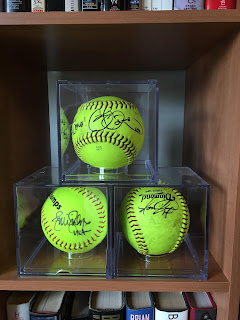 Cat Osterman (top), Jennie Finch and Monica Abbott.
Posted by Johngy at 6:00 AM

Sweet collection! I know you mentioned you didn't need a fourth to complete the monument, but I'd recommend Lisa Fernandez. In 1993 (senior year at UCLA), she led the nation in earned run average and in batting average.