Cards That Never Were is a recurring series in which I create virtual trading cards for players missed in various sets.  It is a concept I have borrowed from far too many others to list, but I appreciate them all.
Kicker Mark Moseley was selected by the Philadelphia Eagles in the 1970 NFL Draft.  He played in Philadelphia for the 1970 season, then joined the Houston Oilers for 1971 amd 1972.  He did not play in 1973.  He joined the Washington Redskins for the 1974 season and played there until midway through the 1986 season.  He finished his career with a few games with the Cleveland Browns.
Moseley appeared on a 1971 Topps card, but then did not reappear until the 1975 set.  He then stayed on Topps cards through the 1986 set.  Therefore, he is missing cards for 1972, '73 and '87.
I could only find one picture of Moseley with the Oilers and that was an oddly cropped Sunoco card, which I could not make into a Topps card.  I did create a 1987 "career capper" for Moseley.  I also will keep an eye out for any shot of him with the Oilers to finish his card run. 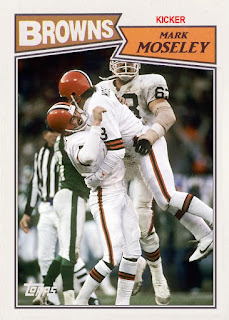