Celebrity Jersey Cards is a weekly series in which I create virtual trading cards for celebrities wearing jerseys.  Today, we continue our alphabetical romp through Major League Baseball.

Born in Yonkers, NY, Thomas Laughlin became famous as pro wrestler Tommy Dreamer. A few years after his pro debut, Dreamer joined ECW and became a star while helping to build the company into a hugely popular promotion. Unfortunately, ECW eventually went out of business, but Dreamer kept wrestling on the indy scene, until he joined the WWE. Dreamer erned his Celebrity Jersey Card when he wore a Sox jersey to a comic con in Chicago. 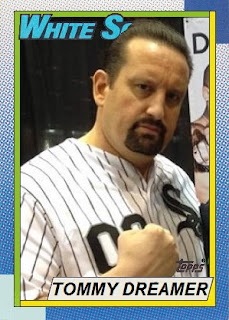 Born in Poland, Joanna Jedrzejczyk is a former Muay Thai kickboxer who competes in the Ultimate Fighting Championship.Nicknames "Joanna Champion" or "Joanna Violence," she is a former strawweight champion in the UFC. She gets extra points for holding her title belt on her Celebrity Jersey Card. 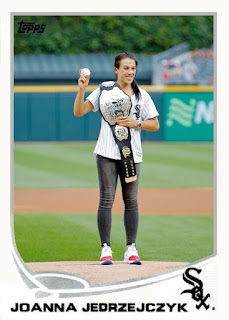