I had this scheduled as a separate bit about a favorite teacher wearing my Johngy's Beat shirt. Unfortunately, it now is an RIP piece about that teacher.
Roscoe Lindsey was my senior year English teacher at Mt. Carmel High School. It's not nostalgia which makes me think fondly of Mr. Lindsey. I considered him a favorite back in the day.
Obviously, he was an African American, but color was never an issue with him. He saw us all as one and we never saw color with him either. He was just a man who was always there for us.
English class was fun (or as fun as it could be) with him. He taught, without nagging. I still remember one of his favorite quotes. “Merely corroborative detail, intended to give artistic verisimilitude to an otherwise bald and unconvincing narrative” was a quote by W.S. Gilbert. Why I remember a quote from 35 years ago speaks of the impact that he had.
Several years ago, thanks to the wonderful world of Facebook, I reconnected with Roscoe. Well, actually, I connected with Rocco. I forget the exact path, but at some point, he started becoming known as "Rocco." I think the story was that there was a misunderstanding of his name and it just stuck. That would be typical of him. It didn't matter. Rocco or Roscoe or Mr. Lindsay, he was just a good-hearted man.
We exchanged messages on occasion. Sometimes I would toss a grammar question his way. Sometimes he would ask me about former students. Unfortunately, a few times we shared the passing of former students.
A few weeks ago, one of his relatives posted that he had a heart attack and had passed. At 63, Roscoe was gone. I'll miss our exchanges and I'll miss just knowing that this good man was walking among us.
RIP Roscoe "Rocco" Lindsey. You left quite a legacy and made an impact. You will be missed. 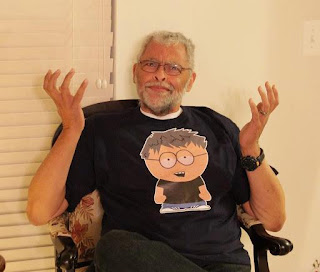 Roscoe Lindsey on the East coast-November 2012.
Posted by Johngy at 6:00 AM

Sorry for your loss. As a fellow teacher... it's nice to see a former student recognize their teacher. I'm sure his family appreciates it too.

I think the picture of him wearing your shirt says it all. You hadn't seen him in decades, but connected with FB and thought enough of you to wear your shirt.
I disagree about him not nagging as a teacher. If you said things like, "like", "you know", "umm", etc, he would point it out endlessly when you did it. It REALLY got people to stop doing it, a thing I am sure people remember, ya know.....

I think of Mr Lindsey all the time. He use grab my shoulders and say you have this you can do this. I was not very good in school and quite kid. He help me get threw school. class 1983 Mt Carmel. 20 years USMC. Thank you Mr Lindsey, Tom Strocchia.

Mr Lindsey was my English teacher at Mt. Carmel in the mid 80's. I recently had a dream about him which made me look him up again only to find that he passed a couple years ago. So sorry to hear this. Can't say my time at Mt. Carmel was my favorite period in my life but he made it enjoyable. Genuinely concerned about all of his students. Ain't no one,,, oops, sorry Mr. Lindsey, There isn't anyone who made English any more enjoyable than he did. Rest in Peace sir. You had an impact on my own teaching.
Steve Barsotti....

Steve-
Thanks for your comment and memories of Mr. L. He was a great person.