Celebrity Jersey Cards is a regular series in which I create virtual trading cards for celebs wearing sports jerseys. TV's Deal Or No Deal is enjoying a rebirth, but without most of the models from yesteryear, two of whom are featured here.

Aubrie Lemon might have stood by the most different numbered briefcases on DOND. After being the briefcase #23 model in the first season, she switched numbers several times substituting for other models during the next few seasons. Lemon has done some acting and is also qualified for Mensa membership. On her Celebrity Jersey Card, Aubrie represented the Indianapolis Cplts and was joined by former Pittsburgh Steelers QB Kordell Stewart. She is wearing #23 (to match her briefcase), most notably worn by Frank Gore. 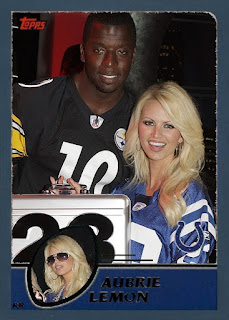 Lisa Gleave represented briefcase #3 during her run on DOND. For the special NFL edition DOND, she represented the Oakland Raiders and wore #3, most notably worn by Daryle Lamonica or more recently by Carson Palmer. Gleave is joined by former New York Jets WR Wayne Chrebet. Like many of the DOND models, Gleave also has ventured into acting. 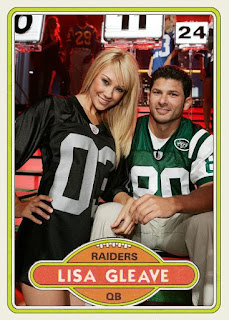