The Chicago Bliss won the 2018 Legends Football League championship. that is their 4th championship in the last 6 years. Coincidentally I started covering the Bliss in 2013, during their first run at a title.
One of the constants on all four championship teams was Dominique "DC" Collins. DC is the first Bliss player I ever interviewed at a game.
I have written about DC many times. She came to the Bliss with an impressive high school and college resume as a star athlete. Still, full contact football was a different story and a new challenge.
Over the several years I have covered the Bliss, I have seen DC work extremely hard at bettering her game. She showed continual and increasing levels of focus, determination and passion. She was an excellent player as a rookie, but she grew into a Hall of Fame quality player. It really was a pleasure watching her development.
Even more important, was knowing her for all these years. She is such a class act off the field, too. She has appeared at most Bliss promo appearances and is always pushing the team and the league. In short, she is the perfect player. The fans, the team and the league all love and respect her. DC is not only one of my favorite athletes, she is one of my favorite people.
My buddy Jim Strong would agree with everything I have written. Jim and I have crossed paths many times at wrestling events and Bliss games. He has become one of the biggest Bliss fans out there. I know Jim has a huge collection of Bliss memorabilia and autographs and DC is one of his favorite players, too.
It's no mystery why so many people love DC. She is just the best. She's a beast on the field and a real sweetheart off of it.
Unfortunately for all, DC has announced her retirement. It will be interesting to see how she handles life away from the Bliss. I have no doubt that she will remain busy with her job, fitness and coaching others. I just wonder how much she will miss the contact on the field. Walking away from something you love, especially after 4 titles, can't be easy.
Good luck to DC and thanks for the memories! I'm sure I will see you around, but I will miss #12 on the field. 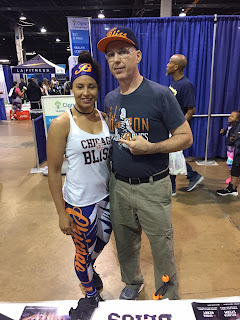 Dominique Collins and Jim Strong in Rosemont, IL-June 2018.
Posted by Johngy at 6:00 AM