Josh Watko is the master behind JW's Wrestling Memorabilia, but he is not a one trick pony. Wrestling might be his strength, but it isn't his only passion.
Josh has gone several times to Steel City Con, a big comic con in Pennsylvania. At the 2017 Steel City Con, Josh met Jonathan Frakes. With a career spanning more than 30 years, Frakes has had a lot of great roles in successful projects, but he might be best remembered as Commander William Riker in the Star Trek franchise. Some folks might recognize him as the husband of longtime daytime actress Genie Francis. Either way, Josh made sure to meet Frakes.
You might not find Frakes on Josh's website, but you will find lots of fun stuff. He discusses wrestling memorabilia old and new, as well as all sorts of other wrestling-related topics. At the end of every year, he also presents his Joshie Awards. It has long been a goal of mine to win a Joshie. I don't even know if there would be a suitable category, but he is in charge and could create one. I don't want it to be a pity Joshie (although I would take that anyway). I do think I do enough wrestling coverage to merit some consideration. Certainly my occasional praise of Josh and his site must help my cause. Maybe I could be in a promotional category? Just a thought.
Anyway, check out Josh's site, especially if you are a wrestling fan. You can see his other pictures (like the one with Frakes) on his social media account or possibly here, as I occasionally feature him (even if I never win the long-desired Joshie!). 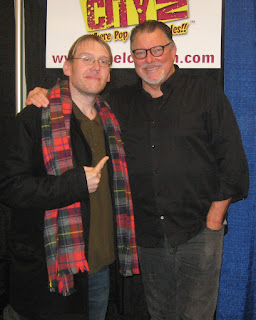