The expansion 1976 Tampa Bay Buccaneers were historically bad, finishing winless at 0-14. Because the team was so bad, it is hard to really fairly critique their quarterbacks. Combined, they threw for 1926 yards, with 9 touchdowns and 20 interceptions, with a completion percentage of 48.1%
The veteran Steve Spurrier started 12 games, with Parnell Dickerson and Terry Hanratty each starting one. Larry Lawrence didn't start any and only appeared in one game. It wasn't a shock that none of these quarterbacks returned the next season. Actually, it wasn't even a shock that none of them ever played again in the NFL.
Incidentally, Huff started 6 games in 1977, as the team went 2-12. The losing streak had reached 26 games, before Huff led them to victory against the New Orleans Saints. Huff kept the team rolling with another victory to end the season.
Unlike the 1976 QB's, Huff did return the next season, although he gave up the starting job to Doug Williams, who would hold that job for several years, finally providing stability to the offense.
Despite all of that, I felt the 1976 QB's needed to be properly represented in the 1977 Topps football set, since all were originally omitted. Somehow the folks at Topps decided to rush an airbrushed Gary Huff into the set as the quarterback for the Bucs.
The Hanratty picture isn't great, but it was the best I could find. At least the others turned out pretty good. 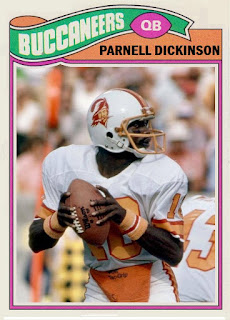 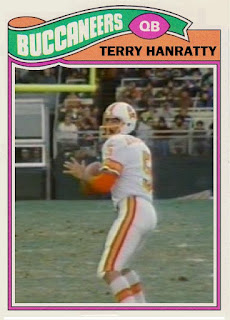 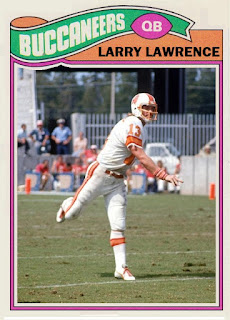 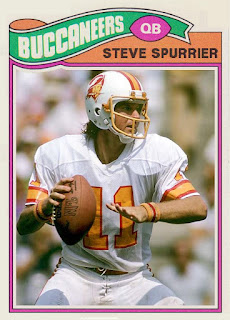