Celebrity Jersey Cards is a regular series in which I create virtual trading cards for celebs wearing sports jerseys. With Deal or No Deal back on the air, today I am featuring two of the most popular former briefcase models.

California native Tameka Jacobs represented the New York Giants on the special NFL Deal Or No Deal episode. The number represented her briefcase number, but for the Giants, Tiki Barber would be the most successful player to don the number. 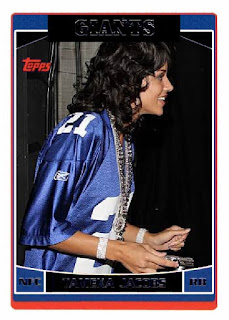 Born in California, Hayley Marie Norman rose to fame on Deal or No Deal. She was so popular on the show that the producers wrote an entire episode around her and her signature hair style. Former Denver Broncos star running back Terrell Davis joined Norman on the set and on her Celebrity Jersey Card. Norman wore #25 of the Redskins, for her briefcase #25, but defensive back Ryan Clark is probably the best known player for the Redskins to wear the number. 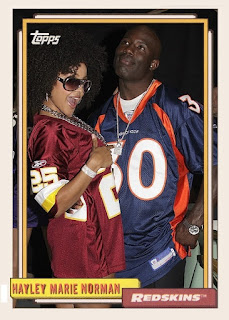