Celebrity Jersey Cards is a regular series in which I create virtual trading cards for celebs wearing sports jerseys. The Chicago Bears were eliminated from the NFL playoffs, so our thoughts turn to other Chicago teams.

Ontario native Dave Bolland was drafted by the Chicago Blackhawks and eventually won 2 Stanley Cups with them. After 7 seasons with the Hawks, the center played one season with the Toronto Maple Leafs and two with the Florida Panthers, retiring after the 2015-16 season. Bolland earned a Celebrity Jersey Card while on the sidelines at a Bears game. 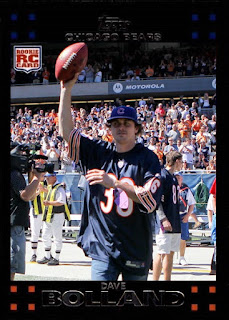 Born in Vancouver, Troy Brouwer was drafted by the Blackhawks and won a Stanley Cup with them. After 5 seasons with the Hawks, he has spent the next 8 seasons with 4 other teams, including the Florida Panthers for whom he still plays. Brouwer's Celebrity Jersey Card shows him seemingly catching a pass over defender Patrick Kane. 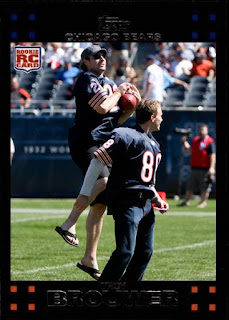