Ed Hearn was drafted by the Philadelphia Phillies in the 1978 MLB Draft. Hearn made his MLB debut with the New York Mets during their 1986 championship season. He was the primary backup to future Hall of Famer catcher Gary Carter. Unfortunately, Hearn did not play in the World Series.
Prior to the following season, Hearn was traded to the Kansas City Royals in a deal that saw future Cy Young award winner David Cone go to the Mets. Slated to be the starting catcher, Hearn's season ended after six games because of a shoulder injury. He played seven games in 1988, but that was it for his MLB career. He did play in the minors through the 1990 season, before retiring.
Sadly for Hearn, his retirement did not go as planned. In 1993, he underwent a kidney transplant. Later he had two surgeries for skin cancer and he had two more kidney transplants.
He battled depression and mood swings, Fortunately, he battled through everything and came out of it incredibly positive.
Hearn's story is very inspirational and is one of the fifteen stories featured in Champions, a book written by my old friends George Castle and John Schenk. I had the pleasure of meeting Hearn at the book launch party for Champions.
Much like his former teammate Barry Lyons, who I recently featured here, meeting Hearns was a real thrill. I had followed his career and read his book Conquering Life's Curves: Baseball, Battles & Beyond. I interviewed him for Signature Strength at the book launch and I talked informally to him, as well. I also got to wear his World Series ring.
Hearns was so fascinating. He had some great baseball stories, but more importantly he had great life stories. He was as entertaining as he was nice. It was simply a joy.
Champions is a wonderful book, filled with stories of courage and strength from fifteen athletes. Check SignatureStrength.org for more info on Champions and the great work Signature Strength does. 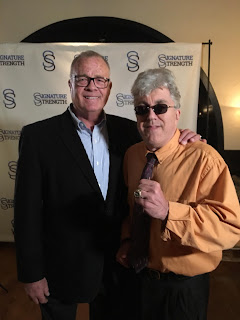