The new year marks a new era for Adolfo and Carrie Dorta and Days of the Dead. Prior to the last show in 2018, Adolfo announced he was amicably splitting from DotD.
I have a lot of mixed feelings about Adolfo's announcement. Obviously, I am very happy for Carrie and Adolfo and I wish them well in whatever direction their lives take. They are two of the coolest, funnest, most genuine people I have ever met.
I first met Adolfo at the first DotD in 2011 in Indianapolis. We worked a deal for me to cover and promote DotD. A year or so later, I met Carrie Gedeon, who became Adolfo's partner in DotD and more importantly in life, too. They are such a great couple.
Over the years though, it became much mote than me just covering an event. Days of the Dead became a big friend reunion for me. I looked forward to seeing my friends almost as much as I enjoyed meeting the celebrities. I attended every DotD in Indy and Chicago and the debut show in Louisville, too.
Adolfo and Carrie have always treated me well at DotD. They welcome me every year and I always look forward to seeing them, even though both are usually a blur at the events, because they are also two of the hardest-working people I know.
Rarely have I seen such a combination of passion, friendliness and fun. These two bust butt all year to make sure the events run smoothly. When any minor blip occurs at the events, these two quickly resolve any issue. Running a convention like this is an arduous, thankless task, but these two deserve much praise.
They always put the fans first, but they do occasionally get in a picture with a celebrity guest. Such was the case several years ago when they posed with Danny Trejo. On Facebook, Carrie made me laugh when she wrote, "people gave me a lot of sh!t about not texting, but I bet they never give Machete sh!t about not texting."
Days of the Dead will go on without Adolfo and Carrie. They would want it that way, too. Still, it will be a little empty without them. I'll miss their calming (yet insane) presence.
I think I will see both in the future and hopefully work with them in some capacity again.
No matter what the future brings though, I want to publicly thank them and wish them a lifetime of happiness. They weren't just my main contacts for a convention I cover. They are friends I consider to be class acts and top quality people. 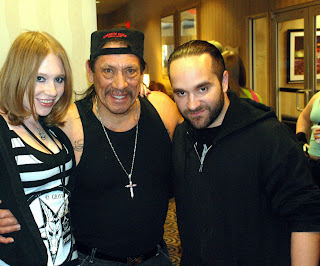 Carrie Dorta, Danny Trejo and Adolfo Dorta in Atlanta, GA-February 2013.
Posted by Johngy at 6:00 AM