I have known Jerry Milani for many years, having met him at Wizard World. As the PR and Media manager, Jerry has been my main contact at Wizard World and he has facilitated all of my interviews and coverage, for which I am extremely grateful.
Beyond his work at Wizard World, Jerry is great guy. "The Pride of Fordham" is a big sports fan. I can even understand his New York allegiance based on his native New Yorker status. Jerry is often at sporting events as a fan or as a writer/reporter.
Recently, Jerry met Lizette Salas in New York. Turning professional in 2011, Salas is one of the top golfers on the LPGA Tour. She takes great pride in her Hispanic heritage. Jerry explored this aspect and more in his story on Salas, which can be found at LPGA Star Salas Clicks With Hispanic Fans, Marketers.
I enjoy Jerry's work in and out of Wizard World. Perhaps one day, we can team up for a joint writing project.
You can check out other stories by Jerry at Portada-Online.com. You can also check WizardWorld.com for all of the info, including locations, dates, celebrity guest lists and more for Wizard World events. 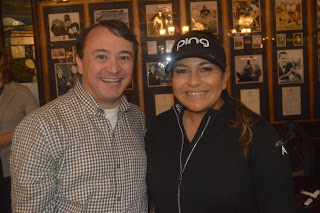 Jerry Milani and Lizette Salas in New York, NY-January 2019.
Posted by Johngy at 6:00 AM