The Chicago Auto Show runs from February 9-18 at McCormick Place. As I look forward to this year's event, I am sharing some of my favorite moments frm last year's CAS.
Chicago's WSCR radio broadcast many of their shows from the CAS. It was a cool chance to see the broadcasters in action and to chat with them a bit during breaks.
The Score has always been a bit of a lightning rod on Chicago's radio scene. It has had controversial hosts and had undergone some changes in focus over the years. Like it or not, you have to admit discussing sports 24 hours a day, even in a sports town like Chicago, is difficult. The Score hosts do a great job of shuffling topics and trying to keep the conversations lively.
Between assignments at CAS, I often hung around the WSCR booth for some sports talk. At last year's CAS, Matt Esposito and Steve Rosenbloom were two of the Score hosts top do a show. Espo and Rosey are two of my favorite Score hosts, although neither has an everyday slot. Espo is excellent, whether as a reporter, update guy or host. He is sensible and knowledgeable. Rosey is a longtime veteran of the Chicago sports scene. He mixes fun with rational sports discussions. I think the two make a good combination, as witnessed at the CAS 2018.
Espo and Rosey drew a big crowd while broadcasting at CAS. Despite being popular and having lots of fans wanting to talk (or argue) sports with them, Espo and Rosey took a few minutes to talk with me.
Go to ChicagoAutoShow.com for more info. You can also follow the Chicago Auto Show on Facebook and the Chicago Auto Show on twitter for updates, scheduling and more info. You also follow Esposito on twitter at @Espo670 and Rosenbloom on twitter at @SteveRosenbloom. 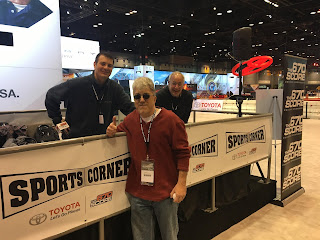 Mike Esposito, Steve Rosenblum and me in Chicago, IL-February 2018.
Posted by Johngy at 6:00 AM