The Chicago Auto Show is here through February 18. Along with the cars and auto-related products, there are lots of local celebrities at the show. Leading up to the CAS, While I am enjoying this year's event, I am recalling some of my favorite moments from last year's show.
ABC7 Eyewitness News staffers made many appearances at last year's CAS. Alan Krashesky and Kathy Brock reunited for one such appearance.
A native of Philadelphia, PA, Krashesky has been with ABC7 since 1982. Currently, he co-anchors the 5pm newscast with Cheryl Burton. Krashesky has co-anchored newscasts that have been consistently ranked #1 in Chicago.
Born in Washington, Brock joined ABC7 in 1990 as a co-anchor of the morning newscast with Krashesky. Over the years, Brock also teamed with Chicago news legends Floyd Kalber and Ron Magers, before rejoining Krashesky in 2016. Brock retired from ABC7 in May, just a few months after the CAS.
It would have been really cool if the ABC7 setup was like a real news desk. The pictures with the newscasters would have looked like a legit broadcast. I guess that is asking a lot though.
Still, it was fun meeting and talking to the various pairs of ABC7 newscasters. These folks have brought the news into our homes for so may years. They are almost like family.
Krashesky and Brock were very popular at the CAS. Fortunately, I had great timing and was able to get to them very early in their appearance. They were very gracious with all fans though, staying ebyond their scheduled slot to meet everyone there.
Go to ChicagoAutoShow.com for more info. You can also follow the Chicago Auto Show on Facebook and the Chicago Auto Show on twitter for updates, scheduling and more info. You can also follow these two at @KrasheskyABC7 and @KathyBrockABC7 on twitter. 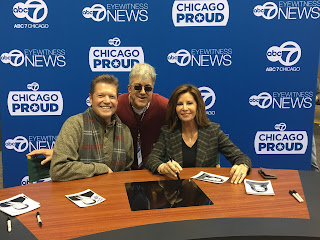