Ed Gonzales and Heather Owens are two of my favorite people from the wrestling world and the convention world. Yes, they have to deal with me in both places.
I first met Heather when she was wrestling at Resistance Pro. Hardcore Heather always gave a great match and she was such a sweetheart outside of the ring. Of course, she was also quite capable of a quick verbal (or physical) jab in or out of the ring.
Soon after, I met her husband Ed at a Days of the Dead event. Ed and Heather were part of the inner core at DotD. The duo was heavily involved in the wrestling aspect of Days, usually handling the wrestling guests and moderating the wrestling panels. Hardworking and fun-loving, these two were always one of the highlights.
At the last DotD in Chicago, they got a picture with actor Tom "Tiny" Lister, who also has a strong connection to the wrestling world. Among his many roles, Lister stayed as Zeus opposite of Hulk Hogan in No Holds Barred. That led to a few stints in pro wrestling. Most of his wrestling played off of his movie with Hogan, but he has carved a legitimate acting career.
One bit of trivia concerning Lister is that he is blind in his right eye. This makes his time in the ring more impressive. In a performance that relies on timing and ring presence, having half a field of vision makes it extremely challenging to hit certain spots.
I should also note that he is a big guy. Standing a legit 6'5", he towers over most of us, including Ed and Heather. Ed and Heather aren't short, it just looks that way in the photo below.
Prior to the last Days event, Ed and Heather announced they were leaving the Days con, along with a few others, including co-founder Adolfo. My reporter sense tells me something else is in the works. To guess it would involve wrestling would not be a huge leap, but I do not have any concrete information on that, just a guess from Magic JohngyBall.
Days will live on, but I will miss seeing these two at fture events. They can't escape me forever though. If there is another event on the horizon, you know I'll be "On the Beat" there, catching up with my old friends and creating new memories.
Go to DaysoftheDead.com or the Days of the Dead Facebook page for more info on this great convention. The next event is May 3-5 in Charlotte, NC. 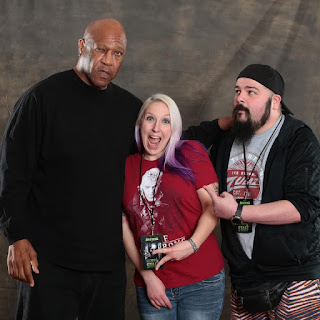 Tiny Lister, Heather Owens and Ed Gonzales in Schaumburg, IL-November 2018.
Posted by Johngy at 6:00 AM