Michigan-born Dean Cain was a great amateur athlete. A star safety at Princeton, Cain tried out for the Buffalo Bills, but a knee injury ended his playing career. He turned to acting, first earning major fame on tv's Lois & Clark. At Motor City Comic Con, I asked him if he had any pictures in a Bills uniform, but all he had were black and white pics. I wanted to make a "Card That Never Was." When he made an appearance for the Astros, he gave me the opportunity to make a Celebrity Jersey Card for him. 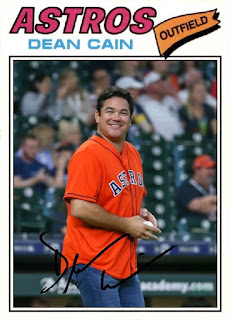 Actor and comedian Jay Mohr was born in New Jersey. Mohr gained major exposure during his two seasons on tv's Saturday Night Live in the early 90's. He has remained active in acting roles, as well as writing books and doing a podcast. Mohr threw out the first pitch at an Astros game to earn his Celebrity Jersey Card. 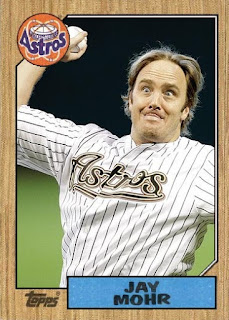