This is a regular series in which I create virtual trading cards for celebrities wearing jerseys. Once again, we are working our way alphabetically through all of the Major League Baseball teams. Today we feature 2 stars from the world of tennis.

A native of Texas, Andy Roddick achieved great success in tennis, ultimately reaching #1 ranking status in 2003. He won many tournaments and awards during his career and was inducted into the International Tennis Hall Of Fame in 2017. Roddick met his wife model Brooklyn Decker after first seeing her on Sports Illustrated's website. Roddick brought his usual game face and intensity when he threw out the first pitch for the Braves and earned his Celebrity Jersey Card. 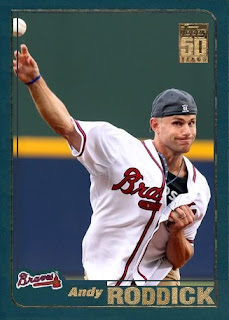 Born in Marietta, GA, Melanie Oudin had a successful 10 year run in professional tennis. Along the way, she won one World Tennis Association tile and six International Tennis Association titles, while ascending to a #31 ranking at her peak. Oudin stayed true to her Georgia roots by donning the Atlanta Braves jersey for her Celebrity Jersey Card. She gets extra points for having other sports equipment and for the action shot. 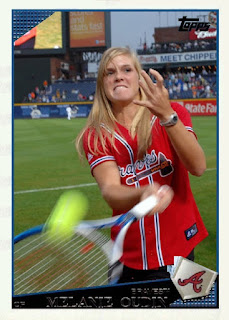