Cards That Never Were is a recurring series in which I create virtual trading cards for players missed in various sets.  It is a concept I have borrowed from far too many to list, but I appreciate all of them.
Hockey runs in the Bennett family.  Harvey Sr., Harvey Jr., Curt and Bill all played in the NHL.  John played in the AWHA and Jim played in the IHL.  Bill was featured in an earlier Cards That Never Were.
Curt starred at Brown University and was selected by the St. Louis Blues in the 1968 NHL Draft.  He made his debut with 4 games in the 1970-71 season.  He played with the Blues in the 1971-72 season, before being traded to the New York Rangers.  After only 16 games with the Rangers, he was traded to the Atlanta Flames.  He remained with the Flames until a midseason 1977-78 trade back to the Blues.  He stayed with the Blues through the next season, before finishing his career back with the Flames for the 1979-80 season.
For his efforts, Curt received cards starting with the 1973-74 set and ending in the 1979-80 set.  I was able to create 1971-72 and 1980-81 cards for him.  Still missing is a 1972-73 card. 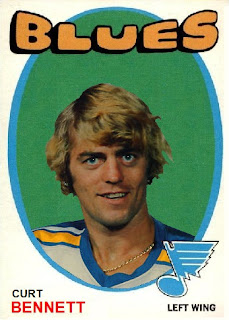 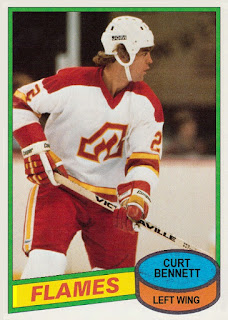 Odd pick for a team that the running joke is "You can't get a cup in St. Louis." Go Smurfs! 2019 Stanley Cup Champs!