Motor City Comic Con 2019 runs May 17-19. As I look forward to another weekend f fun in Novi, MI, I recall some of my favorite moments from previous MCCC's.
It was always extra fun when more friends joined the MCCC trip. My longtime bud Jason Fleigel came with us for several years.
Dwight Schultz has a lengthy resume of acting and voiceover work. His voice can be heard in many animated productions, as well as many video games. His voiceover work often overshadows his acting, but he has been equally as successful appearing on camera, including roles in the Star Trek franchise.
Schultz was extremely popular at MCCC 2012. When you have that lengthy and varied of a body of work, you will attract all sorts of fans and Schultz did. It also helped that he was extremely fan-friendly and very happy to tal;k about any of his projects.
Go to MotorCityComicCon.com for all of the info, including the celebrity guest list and scheduling. You can also find Motor City Comic Con on Facebook and other social media platforms. 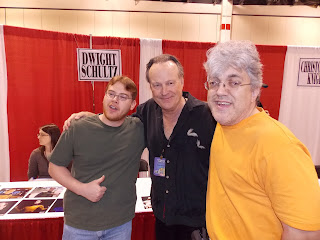