The Motor City Comic Con starts today. I'll be "On the Beat" all weekend creating new memories, but for here, I am recalling some of my favorite moments from my years at MCCC.
Taryn Terrell was part of the 2007 WWE Diva Search. Although she did not win, she was signed to a developmental deal. She has remained on the wrestling scene ever since, working for Impact and on the independent scene as well. She parlayed her wrestling presence into an acting career, appearing in several movies and tv shows.
At the MCCC 2013, Taryn had huge lines. The formula is easy. Beautiful woman + wrestling career = long lines of male fans. Taryn's appeal increases because she has had prominent roles in each company. Although her in-ring career has only produced one title (the Knockouts title), Taryn has kept a high profile wherever she has worked.
MCCC has a history of having quality wrestling stars on their celebrity guest list. It's a great place to meet some wrestlers without the usual super long lines at wrestling shows. They also usually give you a bit more time than at wrestling shows. It's one of the things I love about MCCC.
You can follow Taryn at @IAmTarynTerrell on twitter. Make sure you go to MotorCityComicCon.com for all of the info, including the celebrity guest list and scheduling. You can also find Motor City Comic Con on Facebook and other social media platforms. 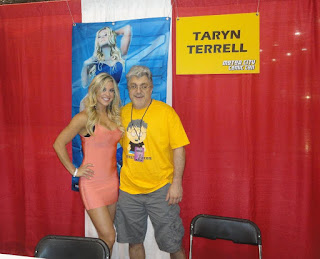 I think I need to start watching wrestling again...