If there was a Chicago Bandits Hall of Fame, former player Danielle Zymkowitz would be a lock to be enshrined. Z played 7 seasons with the Bandits, being a vital part of the 3 NPF championships. She was the consummate player. I loved watching her play and I am grateful to have seen her up close for several seasons. I am even more privileged to have interviewed her several times.
I hated to see her retire, but she has been coaching in the collegiate ranks and that is where he immediate future is. I am happy to have related my total respect for her last interview as a member of the Bandits.
If there was a Bandits fans Hall of Fame, Sheri Samson would definitely be a first ballot inductee. Part den mother, part raving fan, Sheri has witnessed more Bandits games than anyone. Her constant presence at the ballpark is like comfort food for the softball soul. It's just good seeing her there every game.
Z appeared at a game last season and of course, greeted Sheri. It's a great picture which represents a lot of Bandits history.
Go to ChicagoBandits.com for more info on the team. Also, go to UWBadgers.com to follow Z's progress with the Badgers, where she coaches along with Kirsten Verdun, another former Bandit! 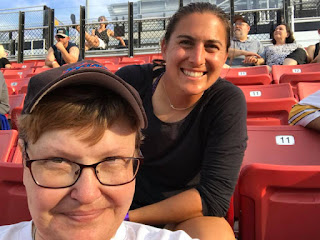