Days of the Dead Indianapolis is returning July 5-7. I have had many great times at DotD events and I am recalling some of my favorites.
Thomas "Tiny" Lister was an actor who made his way into the wrestling world. Usually, it works the other way. In either case, Lister found success in both arenas.
A national shot put champion in college, Lister turned to acting after an injury ended his football tryout in the United States Football League. Many years into his acting career, Lister landed a part in No Holds Barred starring Hulk Hogan. That led to two stints in wrestling (as Zeus, his movie role, and Z-Gangsta), both of which featured him batting Hogan.
Lister made a rare appearance last year at DotD Chicago, much to the delight of attendees. He fits in the horror and wrestling category and his line showed his popularity.
On a side note about Lister, he was born blind in his right eye due to a detached and deformed retina. Lister overcame the odds to have a successful sports and acting career.
Check DaysoftheDead.com for the celebrity guest list at the upcoming Indianapolis show. There will be plenty of horror-related guests and a few wrestlers thrown into the mix. 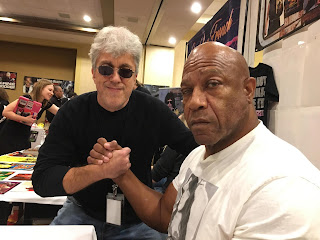