This is a big group Friend Encounters. It is fitting as it is right in the middle of the Chicago Bandits season.
It represents great times for my bud Chris Bejcek and also for me. Chris is surrounded by former outfielder Emily Allard, former infielder Megan Blank, former pitcher Michelle Gascoigne and former Bandits player Sammy Marshall. Now, just three years after this picture, all four ladies are either retired or playing elsewhere. That's just life in the NPF.
Emily was forced into retirement due to concussion issues. She is doing great, running BeTheMomentumSoftball.com and clinics all over.
Megan retired after last season. She has done coaching clinics and I think coachinbg somewhere is in her future.
Michelle was coaching in the collegiate ranks while playing. She is currently the pitching coach at Northwestern, who had a fantastic 2019 season. Check out the Cats at NUSports.com.
Sammy is a local athlete who starred at Western Illinois before becoming a star with the Bandits. In the last offseason, she was traded to Cleveland. It was a tough loss, Sammy is doing fine and also has a bright future in coaching.
Meanwhile, there is Chris, a music junkie. Aside from his passion for the Bandits, Chris is a big time concert goer. His musical love seems to span the spectrum. If you don't see him at a Bandits game, chances are he is at some concert.
These five represent great people I have met and befriended through the Bandits. Bandit Nation isn't just a name for the fan group. Bandit Nation is a community of people who come together for our love of softball, but who have developed friendships outside of the ballpark.
I have seen each of these ladies since their departures from the Bandits and it is like sweeing an old friend. You can't emotionally invest in the team, without being attached to the players. Likewise, they become attached to the loyal fans who have supported them.
There is still plenty of softball action left in the season. I encourage everyone to get in on the fun. Go to ChicagoBandits.com to get all of the info and scheduling. 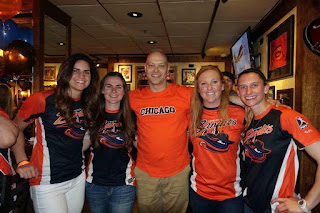 John, you ever consider a jersey card for Brad (Judge Reinhold) from 1983's Fast Times at Ridgemont High? The scene where he takes his sister Stacy (Jennifer Jason Leigh) to the clinic in his 1960 Buick he is wearing a zipper away Indians grey jersey. Just a thought. Fan of yours for three years and counting. Your indie wrestling circuit, Bandits softball, Con scene & local NCAA Women's basketball coverage are unmatched!

Thank you. That made my day!
I like your suggestion and will look for a clean pic of it. I never thought of it, but that's a great one.