Stacey McManus and the Aussie Bandits

The Chicago Bandits are in first place in the NPF (National Pro Fastpitch). Their recent homestand ended with a three game sweep of the Aussie Peppers of Minnesota, highlighted by a perfect game from Rachele Fico. My story for the Patch can be found at Chicago Bandits Take Over First Place.
The Aussie Peppers are basically Team Australia, the team hoping to represent Australia in the 2020 Olympics. Seeing the Olympic hopefuls is cool enough, but a whopping seven Peppers are former Bandits. Rachel Lack, Taylah Tsitsikronis, Ellen Roberts, Kaia Parnaby, Coley Ries, Chelsea Forkin and Stacey McManus all spent time with the Bandits. It was very nice catching up with these ladies and Bandit Nation gave them a warm welcome.
The Aussies were always special here. Their homeland folks down under gave them tremendous support. The Aussie natives also supported the Bandits and my coverage. They always showed a lot of appreciation, thanking me, complimenting me and even giving me a cute koala bear. Things like that create bonds. Those bonds stay strong even when the jerseys change.
Cindy, mother of Stacey and the women who gave me the koala, was in touch with me during the series. She helped me identify a few players in pictures and we reminisced a bit about
"old" times. I teased her a bit, seemingly forgetting to get a picture with Stacey. Of course, I got that pic and sent it to her (along with one the next game).
First place, a perfect game and reconnecting with several friends from across the world made for a wonderful weekend. Next up at home for the Bandits are games starting August 5 with the Beijing Eagles and the USSSA Pride, before the NPF championship series starts on August 15.
Go to ChicagoBandits.com for more nfo on this exciting team. Also look here for my recurring coverage. 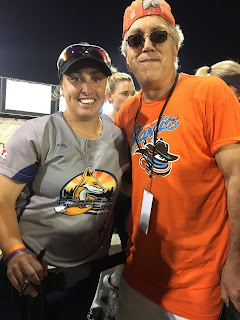