I recently wrote about my experience tossing the ceremonial first pitch for the National Pro Fastpitch Chicago Bandits. My buddy Jim Strong was there to capture the moment on video.
The game itself was unusual. The first place Bandits were hosting the last place Beijing Shougang Eagles. I expected the Bandits to win easily. I was half-right.
In one of the fastest NPF games I have ever seen, the Bandits were winning 1-0 entering the top of the 7th (the last inning). The Eagles scored a run and extra innings loomed.
In the bottom of the 7th, Gwen Svekis singled and was moved to third on a double by Courtney Gano. Emily Crane was intentionally walked to load the bases. Abby Ramirez ended the game with a walk-off single.
After the game, we mingled with the players as usual. We congratulated the team on an exciting win and Jim got a picture with the star of the game.
The regular season is now over and the Bandits have a few days off before the NPF championship series starts in Rosemont on Thursday, August 15. The Bandits will face the second place USSSA Pride, a longtime rival. Go to ChicagoBandits.com for info and news. 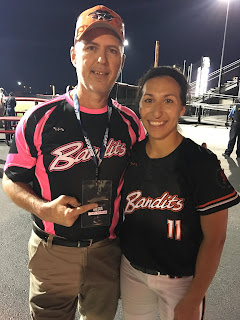 Jim Strong and Abby Ramirez in Rosemont, IL-August 2019.
Posted by Johngy at 6:00 AM