Cards That Never were is a recurring series in which I create virtual trading cards for players missed in various sets over the years. It is a concept I have borrowed from far too many to list, but I thank them all.
Bob Hewko played quarterback for the University of Florida from 1980-1982. In 18 games, he threw for 1,223 yards with 12 touchdowns and 9 interceptions with a 54.3% completion rate.
After college, he signed with the Tampa Bay Buccaneers. He appeared in 2 games for the 1973 Bucs, but didn't throw a pass. The 1983 Bucs had Jack Thompson starting 13 games as the main QB, with Jerry Goldsteyn starting 3 games and Jeff Komlo appearing in 2 games. Hewko was 4th on the depth chart.
When his football career ended, Hewko went into private business. In 2012, Hewko replaced Sean Salisbury as the color commentator for the Legends Football League and has remained with the LFL to date.
While Hewko's NFL career was short, he accomplished a dream. He put on an NFL uniform, stepped on the field and is a part of NFL history.
O course, as cool as it is that he made it to the NFL, I certainly understand why Topps did not make a card for him in their 1984 set. Still, as always, I am out to correct omissions when I can.
I only found one picture of Hewko with the Bucs. The photo came from Hewko's Facebook page and seems to be from a preseason game, since he didn't throw any passes in the regular season. It's not the best picture, but it'll have to do. Below is the 1984 Hewko Topps card that never was. 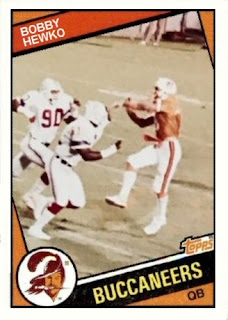