Detroit native John Gordon was already an established broadcaster when he joined the Minnesota Twins in 1987. He retired after the 2011 season an was inducted into the Twins Hall of Fame. Gordon also appeared in Little Big League, as fictional Twins broadcaster Wally Holland. He earned his Celebrity Jersey Card while throwing a first pitch. The #25 on his jersey is most likely a nod to his 25 years of broadcasting for the Twins. 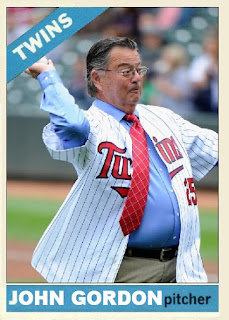 Part of the legendary political Humphrey family, Hubert Horatio "Skip" Humphrey III also became a politician. He served as Attorney General of the state (1983–99) and State Senator (1973–83). Humphrey threw out the first pitch for the Twins and earned his Celebrity Jersey Card. His #1 jersey most likely has no real significance, but I am clling it a nod to our friend Eric Soderholm, who played several years with the Twins. 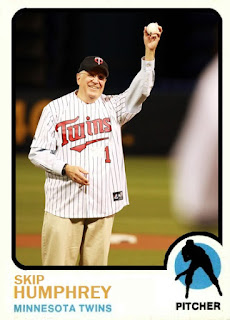