Cards That Never Were is a recurring series in which I create virtual trading cards for players missed in various sets over the years. It is a concept I have borrowed from far too many to list, but I appreciate all of their efforts.
After a successful collegiate career at Long Beach State University, Terry Metcalf was selected by the St. Louis Cardinals in the third round of the 1973 NFL draft. He had five excellent seasons (averaging 699 rushing yards per season) with the Cardinals, before moving on to the Toronto Argonauts of the Canadian Football League. In 1981, he returned to the NFL with the Washington Redskins, rushing for 60 yards on 18 carries.
Topps included Metcalf in their sets from 1974-1977 and then again in 1982. A weird note is the 1978 set not having a solo Metcalf card, but included him on the Cardinals Team Leaders card. That happened with a few others, including Mike Dawson who lead the Cardinals in QB sacks, and I always found it very annoying. Just as odd was including him in the '82 set after he didn't have much action during the '81 season. I'm okay with that card though, because I like cards from every year of a player's career.
I found a good picture of Metcalf and gave him a '78 card of his own. I like the picture because it also features Jim Otis, who was one of the Cardinals two running backs appearing in the '78 set (Wayne Morris is the other). Offensive tackle Dan Dierdorf also partially appears in the upper right corner. 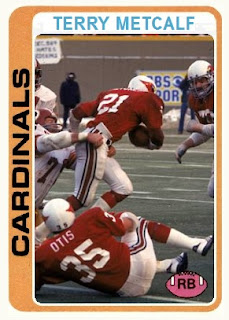