Celebrity Jersey Cards is a weekly series in which I create virtual trading cards for celebrities wearing sports jerseys. To celebrate a big win (finally) by the Chicago Bearswe feature two WWE champs.

Born in Limerick, Ireland, Rebecca Quin rose to fame as Becky Lynch in the WWE. A four time WWE champ, Lynch truly lives us to her "the Man" moniker. She was a flight attendant and has dabbled in acting, too. She attended Columbia College in Chicago, which explains her Chicago connection. Along with Fiance Seth Rollins, Lynch is a real fan of the Bears. The couple attend many games, which is how Lynch earned her Celebrity Jersey Card. 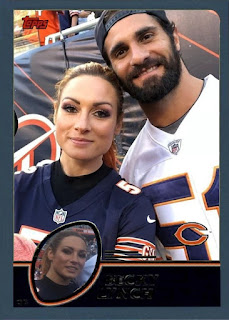 Seth Rollins was born Colby Lopez in western Illinois, which explains his Chicago connection and his Bears fandom. Somehow though, he is also a fan of the St. Louis Cardinals (not the Cubs?). Rollins is not of Hispanic descent, despite his surname, which comes from his Mexican-American stepfather. Rollins has already won 13 titles in the WWE, as well as tournaments, awards and more. Rollins earned his Celebrity Card from a game he attended with fiance Becky Lynch. 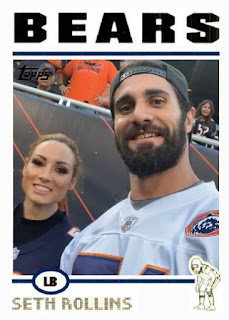