A couple weekends ago, I had a blast at Days of the Dead Horror and Pop Culture Con in Rosemont. It was a weekend filled with celebrities, friends and events and it continues to be one of the highlights of my year.
I wrote about different aspects of DotD at The Dreyfuss Civics Initiative for Global Traveler, Report From Survivors Series Weekend for WrestlingFigs.com, and Days of the Dead Chicago 2019 for Patch.com. The various angles are one of the cool things about DotD.
My journey with DotD began with their debut event in Indianapolis in the summer of 2011. Right from the start DotD was unlike all other conventions. The staff seemed very tight, yet very open to inclusion of others. There was a fun vibe all weekend.
I followed that event with the first Days show in Chicago (Schaumburg) later that year. I have not missed a show in Indy or Chicago since and I have also added Louisville on occasion.
DotD has a fun mix of big name celebrities, underrated stars, fantastic vendors and interesting activities. I have always said DotD has all of the good qualities of major similar cons, without losing the intimacy of a smaller con. It's the best of both con worlds.
This last DotD was headlined by Richard Dreyfuss and Steve Guttenberg. These two legends were fantastic with the fans. Each made every fan feel special. There was no rushed interaction and every fan went away happy.
I have interviewed many celebrities at DotD, including Lita Ford, Roddy Piper, Linda Blair and so many others. Those interviews can be found on my DotD YouTube playlist.
I am not an employee of the DotD organization. I am simply a fan and a writer who loves attending and covering the event. I thank the DotD organization for the hospitality and allowing me awesome access.
The next DotD event is in Atlanta, February 7-9. There are also several others scheduled or planned for 2020, including Dallas, Charlotte, Indy and Chicago. Check DaysoftheDead.com for more info and here for recurring coverage. 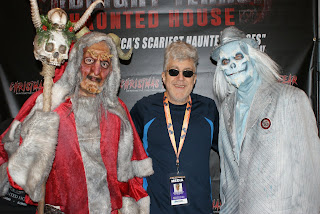 Email ThisBlogThis!Share to TwitterShare to FacebookShare to Pinterest
Labels: Days of the Dead, John Wroblewski, Johngy