Cards That Never Were is a recurring series in which I create virtual trading cards for players missed in various sets. It is a concept I have borrowed from far too many to list, but I appreciate all of them for paving the way.
The Philadelphia Eagles selected Bob Berry in the 11th round of the 1964 NFL Draft. He made his NFL debut with the Minnesota Vikings in 1965, although he played sparingly in his first three seasons. He joined the Atlanta Falcons in 1968 and had 5 seasons there as their primary quarterback. He went back to the Vikings for the 1973 season and finished his career as a backup there, retiring after the 1975 season.
Berry's first card was in the Topps 1970 set. Topps continued giving him a card in their 1971-'73 sets. He reappeared in the 1976 set, which was a bit of an odd choice, but served as a "career capper" for Berry.
As usual for the times, early pictures of Berry were not found. I had to settle for filling in the missing cards from 1974 and '75. I really like the '74 card, because the picture is interesting and different. 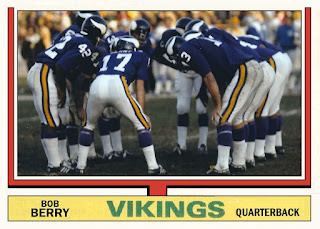 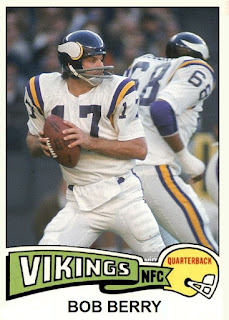