The Squared Circle Expo debuts in Indianapolis May 29-30. My coverage, including updates, continues at Squared Circle Expo Is Three Months Away on Patch.com.
The first wave of wrestler announcements consisted of legends Kane (Glen Jacobs), Rey Mysterio, Christian, Vickie Guerrero, Al Snow, Demolition, Billy Gunn, Darby Allen and the Highlanders. Since then, the list has expanded to include Ted DiBiase, Gangrel, Sammy Guevara, Kevin Thorn, Shark Boy and Brian Knobbs. That's 15 wrestling superstars and with three months still to go, there are sure to be more great wrestling heroes added.
I have met Billy Gunn several times. Billy is in fantastic shape and looks like he could still go in the ring. Billy was a multi-time tag champ. In 2019, he was inducted into the WWE Hall of Fame as part of D-Generation X.
Now he is spending most of his time training the youth at All Elite Wrestling. I am sure he is also guiding the career of his son Austin.
At the Squared Circle Expo, you will have a chance to talk to Billy about his legendary career and anything else. Could he even step in the SCE Ring? You can find out live as it all happens.
Check SquaredCircleX.com for all of the info on this great event. Also follow Squared Circle Expo on Facebook for more frequent updates. 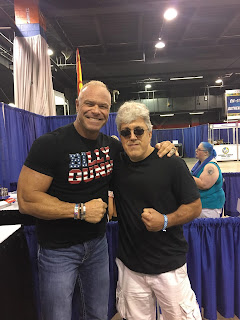