Joker and the Chicago Knockouts

Last month, I took in my first night of Chicago Knockouts Roller Derby action. My recap can be found at A Night With the Chicago Knockouts on Patch.com.
This Saturday, the Knockouts will have the Season II title bout. The Punk-Rock Punishers will face the Retro Rumblers for the championship. This promises to be a great battle and a lot of fun.
If I wasn't in Florida, I would be at this match. I had a lot of fun at the February event. The Punk-Rock Punishers beat the Horrific Haunters 14-13 in a game that came down to the very last seconds. The crowd was on their feet as the seconds ticked off.
Because this was my first time with the CKO, I did not have a rooting interest. I was simply hoping for a close game and I got one!
After the game, I met skater-owner The Crimson Vixen and thanked her for the hospitality, while expressing my appreciation for the contest I just witnessed. I told her I would be back and I will be at future events. We have since communicated and there are plans for some interviews and other fun stuff before and during the next season.
I also took pictures and talked to a few other skaters. The Joker was one who clearly stood out. She was gracious and fan-friendly. She even signed Joker cards for fans. Now that was a cool concept and a nice way to be remembered. I applaud that type of marketing. Stuff like that will get Joker remembered and will grow her fanbase.
This Saturday, I will once again be "On the Beat" with the Chicago Knockouts ass I continue my coverage. I will definitely be getting pictures and Joker is on my "must" list.
Check out ChicagoKnockouts.com for more info. Also follow the Chicago Knockouts on Facebook for more frequent updates and other fun stuff. 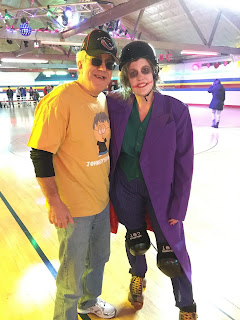