Second generation race car driver Dale Earnhardt Jr. has carved a Hll of Fame career on the track. Now semi-retired, the "Pied Piper" of Daytona is a two-time Daytona 500 winner (2004 and 2014), and has won the Most Popular Driver Award fifteen consecutive times from 2003–2017. He strayed from his North Carolina roots to drop the ceremonial puck for the Columbus Blue Jackets and earn a Celebrity Jersey Card. 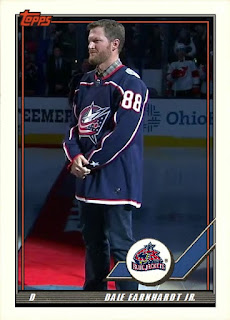 Born in California, Billie Jean Moffitt King and her brother both became professional athletes. Randy pitched for 12 seasons, while Billie became a Hall of Fame tennis player. She had a singles record of 695–155, winning 129 titles. King was also famous for beating Bobby Riggs in the Astrodome in the Battle of the Sexes in 1973. King earned her Celebrity Jersey Card while shooting the puck during intermission at a Chicago Blackhawks game. From the look of victory, I'd say she hit the shot! 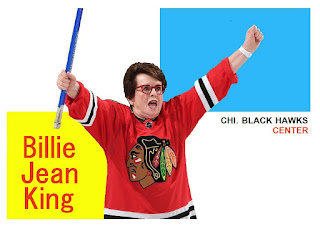