This is a weekly series in which I create virtual trading cards for celebrities wearing sports jerseys. With what should have been the start of baseball season, I begin working my way alphabetically through the Major League Baseball teams.

Born in Chicago, IL, Marilu Henner rose to fame as Elaine Nardo on tv's Taxi. She also starred in Johnny Dangerously, a vastly underrated movie. Marilu is a nickname for Mary Lucy. Henner has hyperthymesia or total recall memory. She remembers specific details from every day of her life since she was a small child. Henner earned her Celebrity Jersey Card when she donned the Angels jersey for her National Anthem performance at an Angels game. 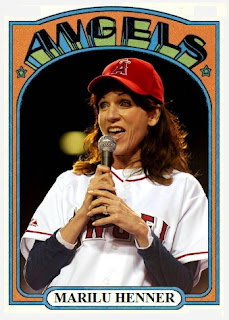 Born in Thal, Styria, Arnold Schwarzenegger has done it all. He has been a fitness competitor, an actor, a politician and more. Now Schwarzenegger has a Celebrity Jersey Card from an ad he did with former Angels outfielder Brian Downing. 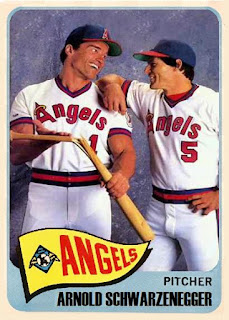