Cards That Never Were is a recurring series in which I create virtual trading cards for players missed in various sets. It is a concept I have borrowed from far too many to list, but I appreciate all of their efforts.
Doug Favell started his professional hockey career in the Boston Bruins organization. The Philadelphia Flyers selected Favell and teammate Bernie Parent in the 1967 NHL Expansion Draft. After the 1972-'72 season, Favell was traded to the Toronto Maple Leafs for Bernie Parent (who had been traded there in February of 1971). Favell played three seasons with the Leafs, before being sold to the Colorado Rockies. The Edmonton Oilers selected him in the 1979 NHL Expansion Draft, but Favell chose to retire.
Favell played 370 games and had a 317 goals against average for his career. He was one of the first goalies to use the butterfly technique. He was also the first goalie to use a painted design on his mask (although former teammate Gerry Cheevers was the first to actually have artwork on his mask).
An excellent lacrosse player, Favell played professionally for the Detroit Olympics and the Philadelphia Wings. He was inducted into the Ontario Lacrosse Hall of Fame in 2005.
For his efforts, Topps (or OPC) issued cards for Favell in every set from 1969-1979. Since they missed a 1968 rookie card, I felt compelled to create one. 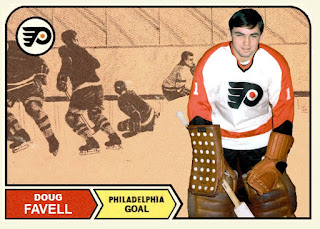