The Motor City Comic Con was supposed to be later this month, but it has been postponed due to the pandemic. While I sadly wait for the situation to be resolved and the MCCC to be rescheduled, I am recalling some of my favorite times there.
Christy Hemme was one of the main guests I wanted to meet at one of my first treks to the MCCC. Back in those days, the celebrities sold polaroids or fans took pictures with film-loaded cameras. It was much harder back since polaroids were never great and the other film had to be developed before you could tell if the pictures were any good.
Christy was a wrestling personality, among other things. She has also modeled and dabbled in singing. Christy has such an energetic and charismatic personality, she could be a success at anything.
Already the mother of a little girl, Christy and her husband became parents to quadruplets in early 2018. She seems so happily ensconced in family life. In one of my interviews with her, she was gushing about it. I am so happy for her. She is such a sweetheart. She even was kind enough to do a promo for this site (as seen in the left hand column).
I haven;t seen Christy in a while. I miss that smiling face and great laugh. This is a call-out to all comic con and wrestling promoters to get Hemme-powered in 2020.
Follow Christy at @HemmePowered on twitter for news and updates (and cool pics of her beautiful family). Go to MotorCityComicCon.com for all of the info, including the celebrity guest list and scheduling. You can also find Motor City Comic Con on Facebook and other social media platforms. 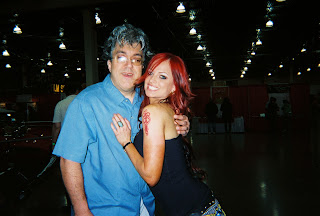