Abby Ramirez and the Bandit Academy

There is no 2020 National Pro Fastpitch season. The Chicago Bandits are not playing in Rosemont. Still, the Bandit organization is keeping busy.
The Bandit Academy is up and running. Based at the Ballpark in Rosemont, instructors Holly Scott, Jourdan Skirha and Abby Ramirez work hard to help young players. The Bandit Academy offers private instruction, team workouts, camps, clinics, and other events. It aims to "improve, build upon, and create even more future opportunities in our sport."
A Chicago native, Abby attended Trinity High School and was named the 2013 Illinois Gatorade Softball Player of the Year. She went on to star at the University of Michigan. She racked up quite a lot of achievements, including


An undrafted free agent, Abby joined the Bandits in 2017 and went 2-3 in her debut. Over the next three seasons, Abby would play in 121 games, hitting .294 with 21 RBIs and 39 runs scored. She also has a .964 fielding percentage.
The Bandits did a great job scouting and signing Abby. She is a credit to the organization. She is great with fans and has always been good to me. My first interview with her is at On the Beat With Abby Ramirez.
Abby has proven to be versatile on defense, logging time at shortstop and second base. In 2019, she made the All-NPF team at second base.
That kind of resume is impressive enough, but Abby is much more than a list of accomplishments. She is a quality person who is dedicated to softball now and for the future. She is a valuable asset to the Bandit Academy.
Abby, Holly and Jourdan do a great job at the Bandit Academy. They have also been joined occasionally by others, including some Bandits.
The Bandit Academy is offering mini-camps June 15-18 and June 22-25. They are four day camps, with 90 minute sessions having eight participants and two coaches per session.
For more info, go to ChicagoBandits.com. Also, follow the Chicago Bandits on Facebook for more frequent updates and other news. 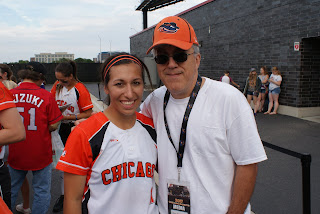