Miami native actress and model Natalie Martinez has appeared in several music videos, as well as television shows and movies. She had a recurring role on CSI: NY, among other series. Martinez tossed a ceremonial pitch for her hometown Marlins to get a Celebrity Jersey Card. I just love the orange jerseys, but Martinez would look good in any color jersey. 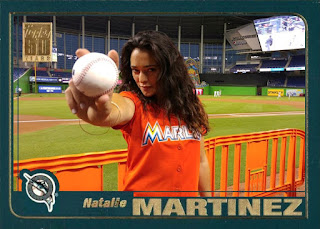 Born in Tennessee, actress Lori Petty co-starred in A League of Their Own, one of my favorite movies. Among other roles, she also was in Point Break, as the woman who taught Keanu Reeves how to surf. More recently, she had a recurring role on Orange Is The New Black. The Marlins honored the 25th anniversary of A League of Their Own by having Petty throw out a first pitch, which landed her on a Celebrity Jersey Card. 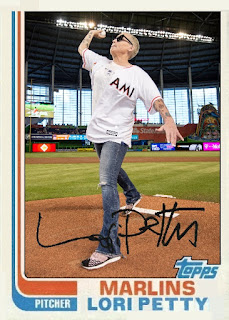