With the National Pro Fastpitch 2020 season canceled, I have to get my softball fix by looking at old pictures. Today, I am featuring two good friends in a picture that makes me smile every time.
Tony Feddeler has been featured here many times. A fan of wrestling, softball, comic cons and other fun stuff, Tony and I have enjoyed many events together.
Somehow in one of our chats, I learned that Tony had never met Sammy Marshall, a local softball star from Western Illinois University who later became a star with the Chicago Bandits. Sammy was traded to the Cleveland Comets a couple seasons ago., but obviously still plays in Chicago when her new team plays here. I had to "fix" the situation for Tony.
I sent a message to Sammy and her mom prior to their arrival, mentioning I had a great friend who wanted to meet her. Although the teams usually take part in the post-game meet-and-greet, I did not want to take a chance.
Tony and I enjoyed a great afternoon of softball action at the ballpark in Rosemont and proceeded to make our way to the post-game fun. We met the Marshall family there and had some fun catching up with them while we waited or Sammy. When Sammy was one with meeting the rest of the fans, she joined us. Tony got his picture and I got a new one, of course.
Truth be told, Tony could have done this without me. The players are always super nice and approachable. Yet, I am happy to have facilitated this for Tony. He's a great guy and a great fan.
While the league is not playing this season, there is still stuff happening. Go to ChicagoBandits.com for more info on the Bandits and the league. 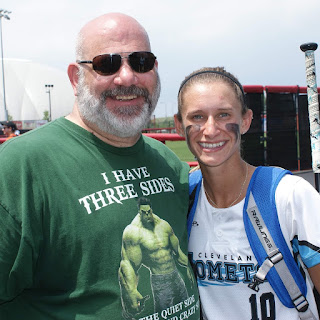